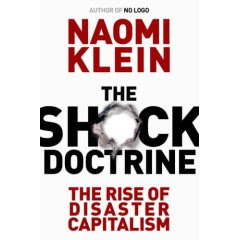 From Poland to Iraq and from China to New Orleans, neoliberalism has risen on the back of what Naomi Klein calls ‘disaster capitalism’. She spoke to Oscar Reyes about her new book, The Shock Doctrine, and new forms of resistance.

"The central message of my book is that we've been told that our ideas have been tried and failed but, in fact, it is the opposite. Our ideas work, but they cost. They are very good for economic growth but they really eat into super-profit, and that is why there has been such an aggressive attempt to paint them as failures.
This idea of co-operatives did not fail - it was never tried. Solidarity never got a chance to enact its real economic programme in Poland before those dreams were betrayed with shock therapy. In Russia there was a very clear choice not to democratically remake the economy, despite the fact that 67 per cent of Russians stated that their preferred means of privatising state companies was to hand them over to the workers as workers' cooperatives.

I find it tremendously hopeful to realise that these ideas that we have been told are impractical did not fail. The notion that our ideas are already discredited is the major source of weakness on the left. It is what makes us tentative in key moments. Pulling these lost worlds out of the narrative of our last 35 years shows that what the vast majority of people wanted in South Africa, Poland, Russia and China did not fail, but was crushed. It was crushed by military tanks and crushed by think tanks....."
Posted by Tony at 3:06 PM