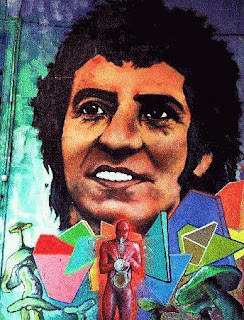 "......We filmed in the National Stadium in Santiago, Chile, where Jara was taken along with thousands of other political prisoners. By all accounts, he was a source of strength for his comrades, singing for them until soldiers beat him to the ground and smashed his hands. He wrote his last song there and it was smuggled out on scraps of paper. These are the words:

What horror the face of fascism

They carry out their plans with

For them, blood equals medals ...

How hard it is to sing

When I must sing of horror ...

In which silence and screams

Are the end of my song.

After two days of torture, they killed him. The War On Democracy is about such courage and a warning to us all that "for them" nothing has changed, that "blood equals medals"."
Posted by Tony at 7:36 AM