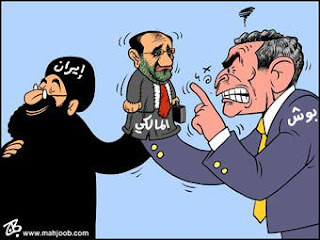 "NEW YORK - Iraqi Prime Minister Nouri al-Maliki said Sunday the shooting deaths of civilians — allegedly at the hands of Blackwater USA guards — and other prior incidents involving the company pose "serious challenges to the sovereignty of Iraq" and cannot be accepted.

"The Iraqi government is responsible for its citizens and it cannot be accepted for a security company to carry out a killing," he told The Associated Press, speaking in his New York hotel suite ahead of his appearance at the U.N. General Assembly.

Noting that Blackwater has been linked to at least seven incidents involving gunfire on Iraqi civilians, he added: "There are serious challenges to the sovereignty of Iraq."......"
Posted by Tony at 11:02 AM