US, NATO and Israel Deploy Nukes directed against Iran 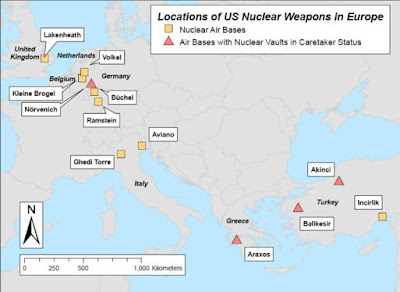 ".......In recent developments, Wayne Madsen (September 27) has suggested, based on US and foreign intelligence sources, that the B-52 carrying the advanced cruise missiles with bunker buster nuclear warheads was in fact destined for the Middle East.

Is the B-52 Barksdale incident in any way related to US plans to use nuclear weapons against Iran?

Madsen suggests, in this regard, that the operation of shipping the nuclear warheads was aborted "due to internal opposition within the Air Force and U.S. Intelligence Community", which was opposed to a planned US attack on Iran using nuclear warheads.

To grasp the seriousness of the "Barksdale incident", it is important to understand the broader context of nuclear weapons deployment respectively by the US, NATO and Israel.

We are not dealing with a single aborted operation of deployment of nuclear weapons to the Middle East.

There are indications that a large number of US made nuclear weapons are currently deployed in Western Europe and the Middle East including Israel.

This deployment pertains explicitly to targets in Iran.

Without downplaying the significance of the Barksdale incident, if Washington were to decide to use nuclear weapons against Iran, they could be launched at short notice from a number of military bases in Western Europe and the Middle East. Turkey has some 90 B61 tactical nuclear weapons which are fully deployed.(See details below).

We are dealing with a coordinated military operation in which US Strategic Command (USSTRATCOM) plays a central role. The main coalition partners are the US, NATO and Israel........"
Posted by Tony at 8:05 PM