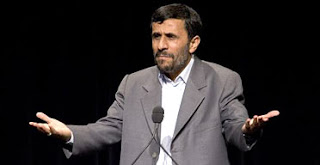 ".......Articulate, evasive, manipulative, the Iranian president - even lost in translation - was especially skillful in turning US corporate media's hysteria upside down consistently to paint those in the administration of President George W Bush as incorrigible warmongers. Both at the National Press Club, via video-conference, and live at Columbia University, Ahmadinejad even had the luxury of joking about fabled Western "freedom of information" - as so many are still "trying to prevent people from talking".

He scored major points among the target audience that really matters: worldwide Muslim public opinion. Contrasting with a plethora of corrupt Arab leaders, Ahmadinejad has been carefully positioning himself as a Muslim folk hero capable of standing up to Western arrogance and defending the rights of the weak (the Palestinians). The way he deflected US ire on the enemy's own turf will only add to his standing.......

On Israel, Ahmadinejad said, "We do not recognize a regime based on discrimination, occupation and expansionism," and he said that country "last week attacked Syria and last year attacked Lebanon"; pretty much what most of the Middle East agrees with. He may have granted that the Holocaust did take place, but the world needs "more research on it". The Holocaust is not his main point: it always serves as an intro to one of his key themes - why should the Palestinians pay the price for something that happened in Europe? He said he wanted a "clear" answer. No one deigned to provide it......

......(CBS) was firing on all cylinders for a casus belli - from "There's no doubt Iran is providing the IEDs" (improvised explosive devices, in Iraq) to "Why don't you just stop denying that you're building a nuclear bomb?" Ahmadinejad was bemused, to say the least. CNN for its part could not resist proclaiming, "His state even sponsors terrorism ... in some cases even against US troops in Iraq.".....

.....just to plunge once again into the Palestinian tragedy. He stressed how Iran "is friendly with the Jewish people" - which is a fact (at least 30,000 Jews live undisturbed in Iran). Then back to the key point: Why are the Palestinians paying the price for something they had nothing to do with? Iran has a "humanitarian proposal" to solve the problem - a referendum where Palestinians would choose their own political destiny.....

....He is more than aware that the nuclear dossier is "a political issue" - a question of "two or three powers who think they can monopolize science and knowledge". It's up to a sovereign Iran to decide whether it needs nuclear fuel. "Why should we need fuel from you? You don't even give us spare parts for aircraft."....."
Posted by Tony at 4:19 AM