Iraq Will Have to Wait 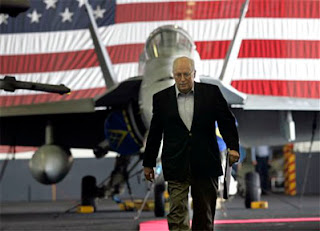 ".......In the days and weeks that have since passed, two things have become clear: Neither Congress nor the American people (including the antiwar movement) have a plan or the gumption to confront President Bush in anything more than cosmetic fashion over the war in Iraq, and while those charged with oversight mill about looking to score cheap political points and/or save face, the administration continues its march toward conflict with Iran unimpeded.....

Continued war in Iraq is a tragedy. Having the conflict spread to Iran would be a disaster. No one can claim to possess a crystal ball showing the future. There are many who, when confronted with the potential for conflict with Iran, choose to brush these warnings aside, noting that such a conflict would be madness, and that the United States currently lacks the resources to fight a war with Iran. Such wishful thinking borders on irresponsible foolishness. If the headlines from this month tell us anything, it is that war with Iran is very much a possibility. The Bush administration has been actively planning war with Iran since the fall of 2004. Since that time, several windows of opportunity have presented themselves (most recently in spring 2007), but the Bush administration found itself unable to pull the trigger for one reason or another (the Navy’s rejection of the presence of a third carrier battle group in the Persian Gulf scuttled the spring 2007 plans)......

We all should remember the fall of 2002. Many felt that there was no chance for a war with Iraq, especially once U.N. inspectors made their return. In March 2003, everyone who thought so was proved wrong. The fall of 2007 is no different. There is a sense of complacency when one speaks of the potential for a war with Iran. But time is not on the side of those who oppose conflict. If nothing is done to change the political situation inside America regarding Iran, there is an all too real possibility for a war to break out in the spring of 2008......."
Posted by Tony at 6:23 AM