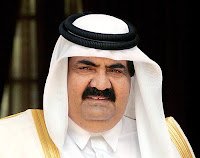 "Foreign Minister Tzipi Livni, in New York for the United Nations General Assembly, met with a number of Arab leaders and diplomats in a bid to normalize ties between Israel and some Arab states.

Livni met Tuesday in New York with the Emir of Qatar, Sheikh Hamad bin Khalifa al-Thani, stressing to him the importance of strengthening the ties between Arab countries and Israel on the basis of a "staged normalization".

Livni and the Qatar leader also discussed the ongoing talks between Israel and Palestinians leading up to the U.S.-led November peace conference and Qatar's willingness to support the negotiations.....

On Monday, Livni met with the Jordanian and Mauritanian foreign ministers, as well as the deputy foreign minister of Oman, Sayyid Bader, which cut off diplomatic ties with Israel following the second Intifada.

Bader and Livni met during a dinner that took place in order to commemorate the regional water purification plant in Oman, the last remnant of joint cooperation projects between Israel and the Arab world which began following the Madrid Conference. Israel, Oman, Morocco, Kuwait, Algeria, Saudi Arabia and other Arab nations all participated in its construction and scientists from the different countries work together through out the year. "
Posted by Tony at 12:22 PM