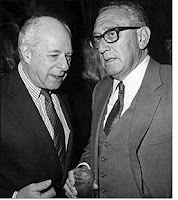 "....First and foremost, it is no secret Podhoretz, one of the most dangerous neocons on the planet, has Bush’s attention, and second the neocon agenda is not “radical right-wing,” as the old broken down left-right political paradigm no longer works. Podhoretz’s sermon on the White House mount is simply another chapter in the neocon-neolib plan to domesticate the Middle East by way of cruise missile and bunker busters.....

....Israel’s “Arab policy” in “its most intimate particulars, is one of deliberate … acts of provocation, intended to generate Arab hostility and thus to create pretexts for armed action and territorial expansion,” explains Naseer H. Aruri.

Norman Podhoretz is one of several primary abettors of this policy, a sort of traveling salesman shuttling between Tel Aviv and Washington, a fact made apparent by the ease of Podhoretz’s appearance on both U.S. and Israeli television, insisting the United States bomb Iranian kindergarten classrooms and hospitals.....

If you’d like a taste of what Podhoretz’s war will look like, read former CIA officer Philip Giraldi’s latest post over at the Antiwar site. “Podhoretz undoubtedly sees the current global conflict as something that is good and necessary, both containable and winnable, but as his judgment on Iraq was fallible, his prediction of Iran’s rapid destruction is also unreliable. It might be useful to imagine just how war with Iran could play out if the Iranians don’t roll over and surrender at the first whiff of grapeshot.”