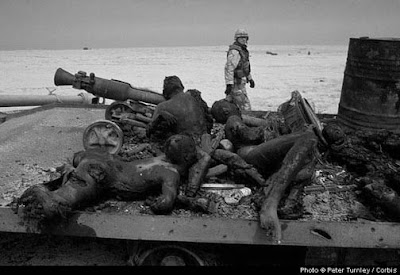 ""At the end of the [1991] war, retreating Iraqi conscripts (mainly from the Kurdish north of the country) and groups of foreign workers fleeing Kuwait, were attacked by massive USA air power.
Rockets, napalm and cluster bombs were used in what is described by the pilots as a "turkey shoot". This is a USA term meaning an unopposed slaughter (emphasis added)."

"A Pentagon group has encouraged some U.S. military snipers in Iraq to target suspected insurgents by scattering pieces of "bait," such as detonation cords, plastic explosives and ammunition, and then killing Iraqis who pick up the items".

Military is ‘baiting’ insurgents in Iraq
Posted by Tony at 5:39 AM