US trains Gulf air forces for war with Iran 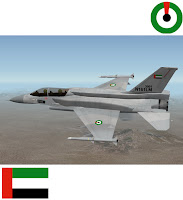 The American air force is working with military leaders from the Gulf to train and prepare Arab air forces for a possible war with Iran, The Sunday Telegraph can reveal.

"An air warfare conference in Washington last week was told how American air chiefs have helped to co-ordinate intelligence-sharing with Gulf Arab nations and organise combined exercises designed to make it easier to fight together.

Gen Michael Mosley, the US Air Force chief of staff, used the conference to seek closer links with allies whose support America might need if President George W Bush chooses to bomb Iran.

Pentagon air chiefs have helped set up an air warfare centre in the United Arab Emirates (UAE) where Gulf nations are training their fighter pilots and America has big bases. It is modelled on the US Air Force warfare centre at Nellis air force base in Nevada.

Jordan and the UAE have both taken part in combined exercises designed to make sure their air forces can fly, and fight, together and with American jets......"
Posted by Tony at 7:58 PM