Ellsberg Calls for Actions to Prevent War with Iran 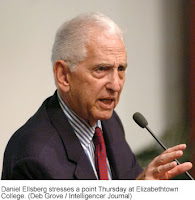 ".....He said the Senate resolution passed Wednesday declaring Iranian Revolutionary Guard Corps as a terrorist organization is an invitation for Bush to declare war on Iran.

Ellsberg compared Wednesday’s resolution to the Gulf of Tonkin resolution, passed Aug. 7, 1964, that gave Johnson a virtually blank check for combat in North Vietnam. He laid out a scenario of $200 a barrel for oil, the possibility of retaliatory attacks against the U.S. and the president keeping open the “nuclear option” to attack Iran. He said he is asking people in government who have information that could stop such a war before it happens to not do what he did by releasing the Pentagon Papers after the war started. He said they should do what he didn’t do - release the information before a disaster happens. “Don’t wait till the war has started,” Ellsberg told the audience. “Don’t wait till the bombs are falling or thousands more have died.”......"
Posted by Tony at 8:02 AM