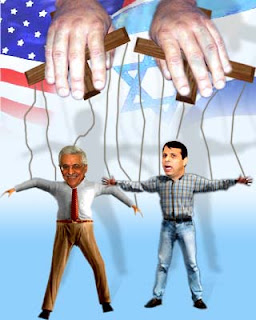 "Mahmoud Abbas has to stay home. As things stand right now, he must not go to Washington. Even his meetings with Ehud Olmert are gradually turning into a disgrace and have become a humiliation for his people. Nothing good will come of them. It has become impossible to bear the spectacle of the Palestinian leader's jolly visits in Jerusalem, bussing the cheek of the wife of the very prime minister who is meanwhile threatening to blockade a million and a half of his people, condemning them to darkness and hunger.

If Abu Mazen were a genuine national leader instead of a petty retailer, he would refuse to participate in the summit and any other meetings until the blockade of Gaza is lifted. If he were a man of truly historic stature he would add that no conference can be held without Ismail Haniyeh, another crucial Palestinian representative. And if Israel really wanted peace, not only an "agreement of principles" with a puppet-leader that will lead nowhere, it should respect Abbas' demand. Israel should aspire for Abu Mazen to be considered a leader in the eyes of his people, not only a marionette whose strings are pulled by Israel and the United States, or affected by other short-term power plays.......

.....Therefore, he shares a shameful common interest with Israel, which will do neither side any good. Judging by his behavior Abu Mazen not only doesn't object to what Israel is doing in Gaza, he may even agree with the twisted doctrine arguing that cruel pressure will subdue Hamas and return the people to Fatah's embrace. In so doing, Abu Mazen proves that he's no "downy chick," as Ariel Sharon once put it, but a cynical rooster who cares little for the welfare of his people.....

......But the least one could expect from the person with the lofty title of "President of the Palestinian Authority" is to strive for the greater good of all his people, especially in light of the extent of their distress. But instead of acting to bring about a cessation of hostilities and opening Gaza to the world, the triumvirate is busy formulating yet another position paper that won't be worth the paper it's written on and that will soon find itself in the garbage bin of history, along with its predecessors. It will only serve to impose increasingly cruel hardships on the people of Gaza. Abu Mazen must not participate in this farce. "
Posted by Tony at 8:58 AM