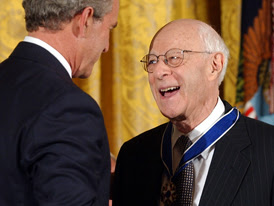 "President Bush and Karl Rove sat listening to Norman Podhoretz for roughly 45 minutes at the White House as the patriarch of neoconservatism argued that the United States should bomb Iran’s nuclear facilities. The meeting was not on the president’s public schedule. Rove was silent throughout, though he took notes. The president listened diligently, Podhoretz said as he recounted the conversation months later, but he “didn’t tip his hand.”

“I did say to [the president], that people ask: Why are you spending all this time negotiating sanctions? Time is passing. I said, my friend [Robert] Kagan wrote a column which he said you were giving ‘futility its chance.’ And both he and Karl Rove burst out laughing.

“It struck me,” Podhoretz added, “that if they really believed that there was a chance for these negotiations and sanctions to work, they would not have laughed. They would have got their backs up and said, ‘No, no, it’s not futile, there’s a very good chance.’ ”

Podhoretz walked out of the meeting neither deterred nor assured the president would attack the Persian state. Yet prior to Iranian President Mahmoud Ahmadinejad’s visit to New York for the United Nations’ General Assembly, Podhoretz said he believes that “Bush is going to hit” Iran before the end of his presidency.