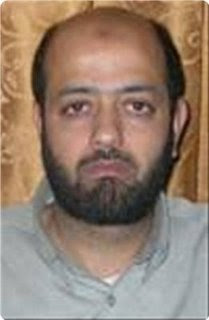 "The Ad-Dameer Prisoners Support and Human Rights Association demanded the Palestinian President, Mahmoud Abbas to issue direct orders for the release of reporter Mustafa Sabri who was detained by Palestinian security forces on July 31.

The Ad-Dameer added that Sabri was repeatedly detained and interrogated over the last several months by the security forces in Qalqilia, in the northern part of the West Bank,

The association also said that Sabri declared a hunger strike in protest to his continued detention in spite of the decision of the high court.

It stated that all sorts of political arrests, and assaults against public freedom and the freedom of press are illegal, and added that Abbas must act in order to stop these violations.

It is worth mentioning that Sabri is an elected member of the Qalqilia city council. He is believed to be a member of Hamas movement."
Posted by Tony at 6:07 AM