Iraq: Violence is down – but not because of America's 'surge' 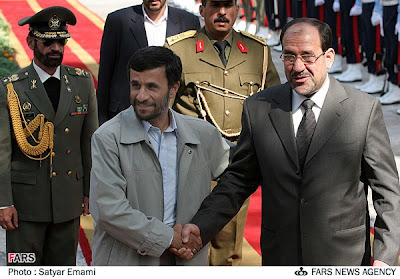 If fewer US troops and Iraqis are being killed, it is only because the Shia community and Iran now dominate

"....The Republican contenders have made these claims of success for the "surge" – the American reinforcements sent last year – although they are demonstrably contradicted by the fact that the US has to keep more troops, some 138,000, in Iraq today than beforehand. Another barometer of the true state of security in Iraq is the inability of the 4.7 million refugees, one in six of the population, who fled for their lives inside and outside Iraq, to return to their homes....

Playing down such killings, the Iraqi government and the US have launched a largely successful propaganda campaign to convince the world that "things are better" in Iraq and that life is returning to normal.......a story that the world's largest Ferris wheel was to be built in Baghdad, a city where there is usually only two hours of electricity a day......

The main reason this ended was that the battle for Baghdad in 2006-07 was won by the Shia, who now control three-quarters of the capital. These demographic changes appear permanent; Sunni who try to get their houses back face assassination....

An important reason for this optimism is the fall in the number of American soldiers killed. (The 30,000 US soldiers wounded in Iraq are seldom mentioned.) This has happened because the war that was being waged against the American occupation by the Sunni community, the 20 per cent of Iraqis who were in control under Saddam Hussein, has largely ended. It did so because the Sunni were being defeated, not so much by the US army as by the Shia government and the Shia militias.....

Sunni insurgent leaders who were nationalists or Baathists realised that they had too many enemies.....

...In so far as the surge has achieved military success, it is because it implicitly recognises America's political defeat in Iraq. Whatever the reason for President George Bush's decision to invade Iraq and overthrow Saddam Hussein in 2003, it was not to place the Shia Islamic parties in power and increase the influence of Iran in the country; yet that is exactly what has happened.

The surge only achieved the degree of success it did because Iran, which played a central role in getting Nouri al-Maliki appointed Prime Minister in 2006, decided to back his government fully. It negotiated a ceasefire between the Iraqi government and the powerful movement of Muqtada al-Sadr in Basra, persuading the cleric to call his militiamen off the streets there, in March and again two months later in the Sadrist stronghold of Sadr City. It is very noticeable that in recent weeks the US has largely ceased its criticism of Iran. This is partly because of American preoccupation with Russia since the fighting began in Georgia in August, but it is also an implicit recognition that US security in Iraq is highly dependant on Iranian actions.

....But today the US has no alternative but to support Mr Maliki and his Shia government, and to wink at the role of Iran in Iraq. If McCain supposes the US has won a military victory, and as president acts as if this were true, then he is laying the groundwork for a new war."

COMMENT: In this cogent analysis the picture becomes very clear. If the resistance to the US occupation, which was waged by the "Sunni"/Baathist/nationalist Iraqis has been defeated, and if that defeat was not at the hands of US troops, but at the hands of the sectarian Shi'a militias, created, financed, armed, advised and supervised by Iran, then by definition Iran has been a silent partner with the US occupation all along.

Fiery rhetoric notwithstanding, it is becoming clearer by the day that Iran will continue to play a significant role as the silent partner of the Empire, as long as the Empire leaves Iran alone.

The "security" agreement that will allow the US to permanently occupy Iraq is a virtual certainty and it will be signed by Iran's man, Maliki. It appears that Iran does not mind permanent occupation of Iraq as long as Iran gets a commission for helping to police and "stabilize" Iraq.

For me this is a major re-think. For the first time in years I am now doubtful that USrael will attack Iran. A major deal has been struck quietly.

This raises a major question about the advisability of relying on political Islam as a revolutionary and liberating force in the Arab/Muslim world. When you see the Shi'a branch of this "revolutionary" Islam (as represented by Iran) and the Wahhabi branch created by the US (as represented by Al-Qa'ida) trading accusations of being agents of the Empire, you know that the project of political Islam has been doomed.

Shame on all Iraqis for letting themselves to be used as pawns of the US and of Iran. All Iraqis will pay a very dear price for generations to come for such stupidity.
Posted by Tony at 4:29 AM