'The Forgotten Fighter': Nablus's Will to Live 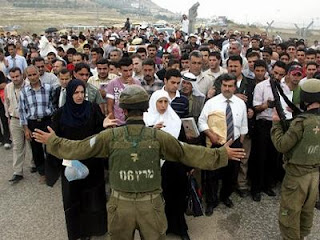 "Many Palestinians that I met during my travels in the West Bank told me that to know what Palestine really was about and meant, I had to go to Nablus. Most of them also told me that Nablus was their favourite city.

After spending 5 weeks there this summer, I understand why.

Arriving from Ramallah (on the fastest taxi/service ride I have ever experienced) the first thing you see on arriving in Nablus is its most famous checkpoint: Huwara.

Huwara, its people and its colour. Yellow.

Yellow like the hundreds of taxis and services parked on both sides of the checkpoint. You need them to leave the city and to get inside the city. Since the start of the second intifada, entry to Nablus by car or truck has mostly been forbidden. You cross the checkpoint on foot, on your way in and out.

Once in a service (cheaper taxis that take people from one set stop to another, most of them old Mercedes) it takes only 5 mins to reach Nablus' vibrant city centre.

And then, something else hits you and you start to realise that Nablus is like no other place in the West Bank......"
Posted by Tony at 4:03 AM