The New Saudi Age of Enlightenment; Celebrate Now! Is it Any Wonder that the Entire Arab World is Living in the Middle Ages, Today?? 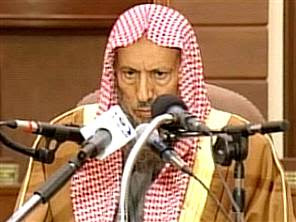 "A Saudi scholar has issued a religious decree saying it is permissible to kill the owners of television networks broadcasting "depravation and debauchery".

"It is lawful to kill ... the apostles of depravation ... if their evil cannot be easily removed through simple sanctions," Saleh al-Luhaidan, chief justice of the supreme judicial council, was quoted by the Saudi-owned al-Arabiya news channel as saying.

"The situation is serious ... the degradation of morals is a form of perversion on Earth," al-Luhaidan said.

The 79-year-old scholar, who holds the highest judicial authority in the kingdom, made the comments during a recent radio show in which he was asked by a caller for his opinions on immoral programmes being broadcast on Arab televisions during the holy Muslim fasting month of Ramadan......"
Posted by Tony at 4:54 AM