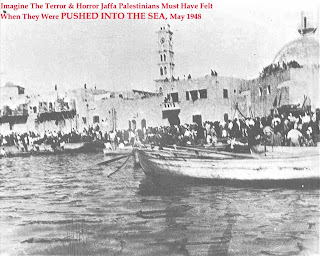 The Expulsion of Palestinians from Jaffa

"......Jaffa is one of half a dozen “mixed cities” in Israel, where Jewish and Palestinian citizens supposedly live together. The rest of Israel’s Palestinian minority, relatives of the Palestinians in the occupied territories, live in their own separate and deprived communities.Despite the image of coexistence cultivated by the Israeli authorities, Jaffa is far from offering a shared space for Jews and Palestinians, according to Sami Shehadeh of the Popular Committee for the Defence of Jaffa’s Homes. Instead, Palestinian residents live in their own largely segregated neighbourhoods, especially Ajami, the city’s poorest district.Only last month, Mr Shehadeh said, the Jewish residents’ committees proposed creating days when the municipal pool could be used only by Jews......

As Israeli historians have noted, however, one of the Jewish leadership’s main aims in the 1948 war was the expulsion of the Palestinian population from Jaffa, especially given its proximity to Tel Aviv, the new Jewish state’s largest city.

Ilan Pappe, an historian, writes that the people of Jaffa were “literally pushed into the sea” to board fishing boats destined for Gaza as “Jewish troops shot over their heads to hasten their expulsion”. [COMMENT: I can personally relate to this as my family was evicted from Jaffa and we lost the home in which I was born, in Ajami, in exactly the way Ilan Pappe describes. My family was forced to take a boat to reach Gaza, and that is where I grew up as a refugee!]

By the end of the war, no more than 4,000 of Jaffa’s 70,000 Palestinians remained. The Israeli government nationalised all their property and corralled the residents into the Ajami neighbourhood, south of Jaffa port. For two years they were sealed off from the rest of Jaffa behind barbed wire......."
Posted by Tony at 8:28 AM