US Contractors Training Georgian Military in Acts of Sabotage 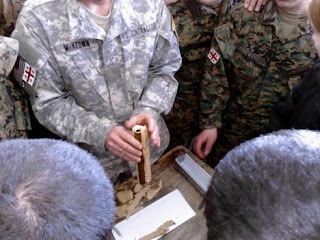 Regardless of the claims by both sides there is clear photographic evidence that the U.S., like Israel, has been providing the Georgian military near the conflict zones with training.

The following is a series of photographs released by the the Russian military to the international media that expose U.S. involvement in Georgia. According to several Russian officials, including Sergey Markov of the Russian Duma, the Russian-Georgian War was in reality an American attack against the Russian Federation via their proxy puppet president Mikheil Saakashvili.

The photographs show training, conducted by foreign military personnel and/or contractors in sabotage techniques....."
Posted by Tony at 5:07 AM