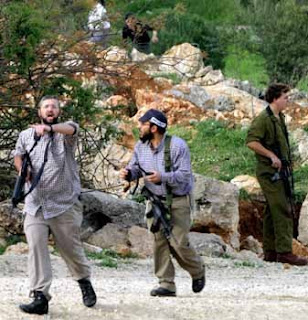 Yitzhar's rabbi: The state stole Israel from the Jews

"....."The proper and healthy thing, and this applies to the events of Shabbat as well as in general, is for the Israel Defense Forces to be involved not only in apprehending terror suspects, but also in collective punishment, up to the level of reprisals, of the environment that supports terror," Dudkevitch told Haaretz Monday.....

"Most of the Arab population - in the Galilee, the Triangle and in Judea and Samaria [the West Bank] - desires the destruction of the state," Dudkevitch continued. "Some of them say this in Western-democratic disguise, others say it without masks."

According to the rabbi, 80 to 85 percent of local Arabs "hope and scheme to destroy the sovereignty of the Jewish people in our land," and therefore, "their emigration should be encouraged."

"There will be many opportunities, both by encouraging and by deporting, but we must start with encouragement, with a general statement. That's the minimum.".....

"The Bible says that when people 'sit in [fenced] camps' it radiates fear and unnaturalness, while when they are in open towns, it is a sign of strength, confidence and heroism. Let the Arabs, not the Jews, live within fortresses, fenced in........"
Posted by Tony at 4:26 AM