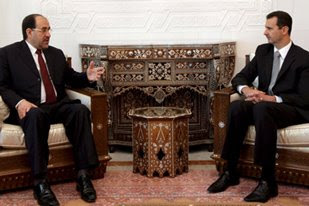 "Syria has appointed Nawaf al-Fares as its ambassador to Iraq, Al Jazeera’s correspondent in Damascus reported.

Al-Fares, who was sworn in by Bashar al-Assad, Syria's president, on Tuesday, was the governor of Syria's southwestern province of Quneitra.

Bahrain, Kuwait, Jordan and the United Arab Emirates have all named ambassadors to Iraq in the past month.

But because of security concerns, the only Arab ambassador actually posted in Baghdad is the Emirati."

COMMENT by Zarathustra: The filthy Syrian regime which has not had diplomatic relations with Iraq since 1980 , Sided with Iran during the war , Supported the US in "Liberating" Kuwait, helped the Americans by closing the border to the resistance... Now has the Chuztpah to open an embassy in Iraq further legitimizing the illegal government under occupation. Shame on them and their supporters.