This is Zionism: Twilight Zone / Dead on arrival 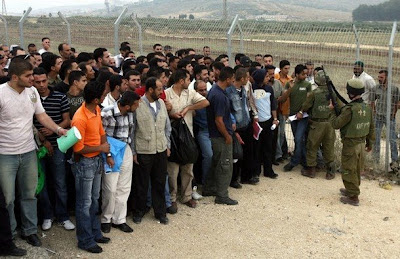 "Nothing helped. Not the pleas, not the cries of the woman in labor, not the father's explanations in excellent Hebrew, nor the blood that flowed in the car. The commander of the checkpoint, a fine Israeli who had completed an officers' course, heard the cries, saw the women writhing in pain in the back seat of the car, listened to the father's heartrending pleas and was unmoved. The heart of the Israeli officer was indifferent and cruel. For over an hour, he would not let the car with the young woman in labor pass through the Hawara checkpoint on the way to the hospital in Nablus. Not to Tel Aviv; but to Nablus; not for shopping, not for work; but to get to the hospital in an emergency. Nothing helped.....

Nahil Abu-Rada is not the first woman to lose her baby this way because of the occupation, and she won't be the last. At least a half-dozen checkpoint births that ended in death have been documented here over the years, and nothing has changed. No punishments, no lessons, not even a request for forgiveness from parents who lose their children because of the coldheartedness of soldiers......"
Posted by Tony at 1:12 PM