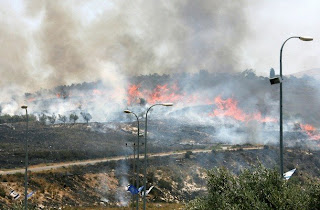 There is an unsaid understanding between the army and settlers

"With ostensibly tacit consent from the Israeli occupation army, gangs of Jewish terrorists, otherwise known as settlers, have been assaulting unprotected Palestinian civilians and their property in many parts of the West Bank.

The most serious incident took place at the village of Asira Al-Qibliya south of Nablus this week when dozens of heavily armed settler terrorists rampaged through the peaceable Arab community, shooting randomly at terrified Palestinians and vandalising their homes and cars.

Fearing for their lives, the villagers had either to flee the village or barricade themselves in their homes as Israeli soldiers refused to make genuine efforts to stop the rampaging settlers. Footage of the incident, obtained from the Israeli human rights group, Btselem, showed Israeli soldiers present at the scene of the rampage, but virtually doing nothing to stop violence...... [View Btselem Video Here]

There are two good reasons not to take Olmert and Barak's denunciations seriously. First, the Israeli army itself is heavily infiltrated by Zionist elements, especially followers of their mentor Abraham Kook. Some Israeli sources have estimated that more than 50 per cent of commissioned army officers happen to be either settlers themselves or adherents of religious Zionism. Many Israeli soldiers serving in the West Bank are themselves settlers, which explains the army's reluctance to deal more forcefully with settler violence against Palestinians.

Second, Israel today is undergoing a pre- election season and politicians think twice before upsetting and alienating the powerful religious Zionist camp. As Israeli Jews drift towards right-wing jingoism, this campaign of ethnic cleansing will continue unless strong outside pressure is brought to bear."
Posted by Tony at 3:48 AM