And so it continues: 26 years after the massacre 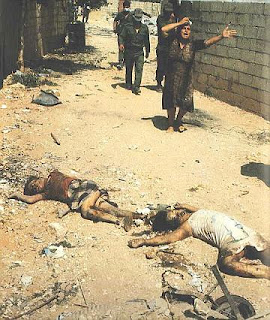 "....It has been more than a quarter of a century since more than 1,000 unarmed men, women, and children were raped, maimed and slaughtered. The massacre occurred at the dividing point of the 1975-1990 Lebanese war. Some might say that the killings were the marker or the catalyst of the war's horrible turning point. Before the Israeli invasion of Lebanon and siege of Beirut in the summer of 1982, the Lebanese civil war had taken many lives and introduced new images and phrases into the Arabic and English languages. The Lebanese war involved many players and funders, not all of them local. But with the entry of the Israeli army and air force, Lebanon witnessed more death and destruction in three months than it had suffered during the previous seven years. Sabra and Shatila, a Palestinian refugee camp on the outskirts of Beirut, marked the site of the Israeli-Palestinian and the internal Lebanese conflicts' intersection. The front lines of these conflicts slashed through the refugee camps for three dark days and three eerily bright nights illuminated by flares that the surrounding Israeli army fired over the camps to assist their Lebanese client militia, the Phalange, in their gruesome tasks......

In her landmark book, On the Origins of Totalitarianism, the German philosopher Hannah Arendt pithily summed up why law is so important: "All that is necessary to achieve total domination is to kill the juridical in Man." The history of the Palestinian people offers a textbook study in the dangers of massacring law and justice. And not only Palestinians are affected. The denial of justice is a denial of humanity, a form of soul murder. There are worse things than dying. Ask anyone in Gaza, where the entire population is daily subjected to genocide on the installment plan.

These atrocities can be and are being committed, because the Sabra and Shatila massacre (among other crimes) was committed, and international justice, or at least the hope of it, was undone. Consequently, it is no exaggeration to say that the Sabra and Shatila massacre did not end 26 years ago today. It's still going on, and all of us are accountable."
Posted by Tony at 3:25 AM