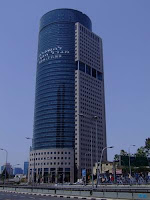 "The British Government's plan to rent new premises in a Tel Aviv skyscraper has run into trouble after a wave of protests that their prospective landlord is a major participant in Jewish settlement-building in the occupied West Bank.

The British embassy has been in negotiations to lease three floors in Kirya Tower from Africa Israel Investments, a company controlled by Lev Leviev, a London-based property and diamonds billionaire with substantial business interests in Israel.

Pro-Palestinian organisations are urging the Foreign Office to cancel the plans, arguing that one of the company's subsidiaries is prominent in settlement building and that Mr Leviev is a big contributor to the Land Redemption fund, which acquires Palestinian land for Jewish settlements.

Daniel Machover, of the UK-based Lawyers for Palestinian Human Rights, says in a letter to The Independent that renting space from Mr Leviev is "tantamount to HM Government condoning Israel's settlement building, supporting clear violations of international law, which in some cases [amounts] to grave breaches of the Fourth Geneva Convention, and hindering the possibility of peace in the Middle East". Most Western governments – including Britain's – regard settlements as illegal under international law......."
Posted by Tony at 6:25 AM