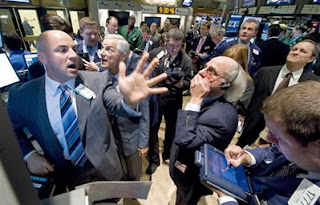 "Has the war on terrorism become the modern equivalent of the Roman Circus, drawing the people’s attention away from the failures of those who rule them? Corporate America is a shambles because deregulation, the mantra of our president and his party, has proved to be a license to steal....

The politicians hesitate to act because candidates of both parties are lavishly financed by the very people who are conning a gullible public."
Posted by Tony at 9:19 AM