Children of a Lesser God 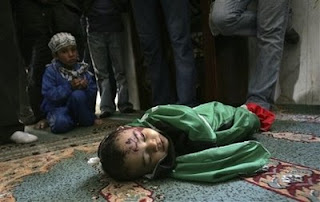 "The children of a lesser Allah, the ones for whom the shelter of their mother and father's embrace has been forever shattered by a thunderbolt from the sky, continue to atone for the hatred passed on from one generation to the next, through no fault of their own. The soldiers with the Star of David are perfectly at ease in their roles as so many contemporary Herods, with 253 massacred Palestinian children so far. An endless horror, for which no soldier, no Israeli army officer, and the Israeli government have never been forced to face their responsibilities for these war crimes....."
Posted by Tony at 8:07 AM