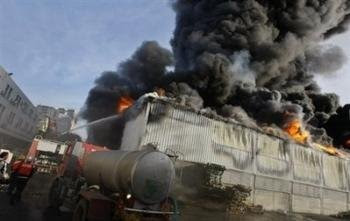 "The main UN compound in Gaza was left in flames today after being struck by Israeli artillery fire, and a spokesman said that the building had been hit by shells containing the incendiary agent white phosphorus.

The attack on the headquarters of the UN Relief and Works Agency (UNRWA) came as Ban Ki Moon, the UN Secretary-General, arrived in Israel on a peace mission and plunged Israel's relations with the world body to a new low.....

Chris Gunness, a UNRWA spokesman, said that the building had been used to shelter hundreds of people fleeing Israel’s 20-day offensive in Gaza. He said that pallets with supplies desperately needed by Palestinians in Gaza were on fire.

"What more stark symbolism do you need?" he said. "You can’t put out white phosphorus with traditional methods such as fire extinguishers. You need sand, we don’t have sand."......"
Posted by Tony at 9:17 AM