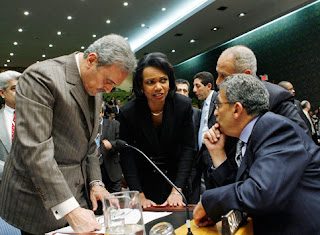 "Israel rejected outright the weak UN Security Council's "call" for "an immediate, durable and fully respected ceasefire." What the Arab foreign ministers hailed as a triumph for their mission to New York was no more than a fig leaf to cover their failure before their increasingly angry and restive peoples who are ever more boldly denouncing Arab leaders' inaction or complicity as Israel butchers Palestinians in Gaza.

......Resolution 1860 was a shameless whitewash of the Israeli aggression and war crimes, which the Arab ministers had no choice but to take after having escaped in the direction of New York from the embarrassing alternative of an Arab summit.

The resolution has serious flaws that the Arab delegations should not have accepted under any circumstances. Calls for an Arab summit by the emir of Qatar and other Arab states to consider reaction to the Israeli onslaught on Gaza were strongly opposed by Egypt and several other states who now stand accused by their people of collaborating with the Israeli enemy, with evidence mounting daily in support of such accusations.....

By entirely endorsing the Israeli position, despite the proven atrocities and the ongoing war crimes, Israel was justified in reading an exoneration and an encouragement in the Security Council's feeble resolution. Further encouragement must have been derived from the resolution's affirmation that the Arabs, despite the humiliation, are still groveling for "peace". And by reaffirming the Arab Peace Initiative, the Arabs are proving yet again that neither insult nor injury in any amount would awaken in them any dignity or self respect."
Posted by Tony at 5:04 AM