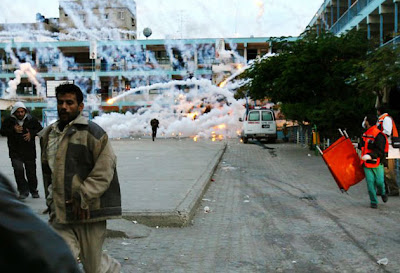 Palestinian civilians and medics run to safety during an Israeli strike over a UN school in Beit Lahia, northern Gaza Strip, on Satuday 17 January.

"A United Nations official has condemned an Israeli shelling attack that struck a UN school in the northern Gaza Strip and killed two people. Spokesman Chris Gunness said the school was crowded with 1,600 people who had sought shelter from Israel's three-week offensive in Gaza.

It was latest incident in which Israeli fire aimed at militants has struck a UN facility during the offensive. Gunness says Israel had the coordinates of the school and knew it was being used as a shelter. He says there should be an investigation into possible war crimes, and that anyone who is guilty should be brought to justice........ "
Posted by Tony at 4:07 AM