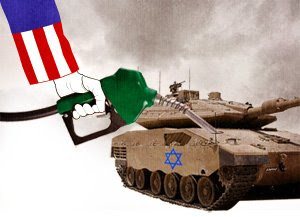 Taxpayers are spending over $1 billion to send refined fuel to the Israeli military -- at a time when Israel doesn't need it and America does.

It's well known that the U.S. supplies the Israelis with much of their military hardware. Over the past few decades, the U.S. has provided about $53 billion in military aid to Israel. What's not well known is that since 2004, U.S. taxpayers have paid to supply over 500 million gallons of refined oil products -- worth about $1.1 billion –- to the Israeli military. While a handful of countries get motor fuel from the U.S., they receive only a fraction of the fuel that Israel does -- fuel now being used by Israeli fighter jets, helicopters and tanks to battle Hamas.

According to documents obtained under the Freedom of Information Act, between 2004 and 2007 the U.S. Defense Department gave $818 million worth of fuel to the Israeli military. The total amount was 479 million gallons, the equivalent of about 66 gallons per Israeli citizen. In 2008, an additional $280 million in fuel was given to the Israeli military, again at U.S. taxpayers' expense. The U.S. has even paid the cost of shipping the fuel from U.S. refineries to ports in Israel.

In 2008, the fuel shipped to Israel from U.S. refineries accounted for 2 percent of Israel's $13.3 billion defense budget. Publicly available data shows that about 2 percent of the U.S. Defense Department's budget is also spent on oil. A senior analyst at the Pentagon, who requested anonymity because he is not authorized to speak to the press, says the Israel Defense Force's fuel use is most likely similar to that of the U.S. Defense Department. In other words, the Israeli military is spending about the same percentage of its defense budget on oil as the U.S. is. Therefore it's possible that the U.S. is providing most, or perhaps even all, of the Israeli military's fuel needs.

What's more, Israel does not need the U.S. handout. Its own recently privatized refineries, located at Haifa and Ashdod, could supply all of the fuel needed by the Israeli military. Those same refineries are now producing and selling jet fuel and other refined products on the open market. But rather than purchase lower-cost jet fuel from its own refineries, the Israeli military is using U.S. taxpayer money to buy and ship large quantities of fuel from U.S. refineries.
Posted by Molly at 9:34 AM