The Palestinians say: 'This is a war of extermination' 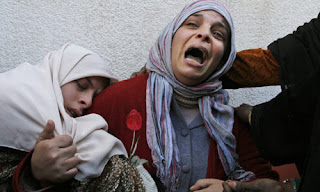 "Everyone says something new is going on here; something different. The residents of Egyptian Rafah are used to the sounds of rockets and shells exploding on the other side of their border, but they've never heard the sounds they've been hearing over the last 20 days. Twenty-five miles further into Egypt the general hospital at el-Arish is used to receiving the Palestinian wounded. The staff have never seen injuries like these before. The hospital forecourt is swarming with ambulances, paramedics, press. The wounded are raced into casualty....

"Look!" On a rubble-strewn street lay the body of a roasted and charred child. Two bones were sticking out where her thighs had been. "The dogs ate her legs," he explains. For a moment I put a hand over my eyes. The phone goes round the table, each man gravely contemplating the burned child on the screen. Then someone asks: "What will it take to make the Israelis stop?""
Posted by Tony at 3:53 AM