Qana and Jabalya: Brothers in Blood 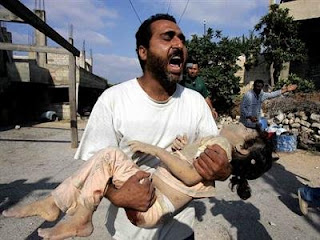 "Israel's Jan. 6 attack on a United Nations-run girls elementary school sheltering more than 1,600 civilians in Gaza's Jabalya refugee camp was not the first time the country's military targeted refugees it helped create. In April 1996, an eerily similar incident took place at a UN compound near the southern Lebanese village of Qana.

Qana and Jabalya share a tragic history. They are the where the innocent were massacred, and the assumption the humanitarian auspices of the UN could protect non-combatants from Israeli shelling, shattered.....

Many different, often contradictory, stories are being issued by the Israelis. But again, their message had been effectively delivered.

And what are the messages of Qana and Jabalya?

It is that not only sympathizers, but any civilian located in remote proximity to Israel’s enemies will be targeted. It is an extension of the doctrine of collective punishment, but with ominous overtones:

“This is the price you will pay. There is nowhere to run and nowhere to hide. There is not an institution or organization on earth that can protect you from us.”

But the two should not be thought of as sister cities, for they now share a different type of bond. They have become blood brothers."
Posted by Tony at 3:43 PM