My message to the West – Israel must stop the slaughter 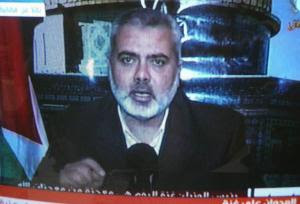 " I write this article to Western readers across the social and political spectrum as the Israeli war machine continues to massacre my people in Gaza. To date, almost 1,000 have been killed, nearly half of whom are women and children. Last week's bombing of the UNRWA (UN Relief Works Agency) school in the Jabalya refugee camp was one of the most despicable crimes imaginable, as hundreds of civilians had abandoned their homes and sought refuge with the international agency only to be mercilessly shelled and bombed by Israel. Forty-six children and women were killed in that heinous attack while scores were injured.

Evidently, Israel's withdrawal from the Gaza Strip in 2005 did not end its occupation nor, as a result, its international obligations as an occupying power. It continued to control and dominate our borders by land, sea and air. Indeed the UN has confirmed that between 2005 and 2008, the Israeli army killed nearly 1,250 Palestinians in Gaza, including 222 children. For most of that period the border crossings have remained effectively closed, with only limited quantities of food, industrial fuel, animal feed and a few other essential items, allowed in.

Despite its frantic efforts to conceal it, the root cause of Israel's criminal war on Gaza is the elections of January 2006, which saw Hamas win by a substantial majority. What occurred next was that Israel alongside the United States and the European Union joined forces in an attempt to quash the democratic will of the Palestinian people. They set about reversing the decision first by obstructing the formation of a national unity government and then by making a living hell for the Palestinian people through economic strangulation. The abject failure of all these machinations finally led to this vicious war. Israel's objective is to silence all voices that express the will of the Palestinian; thereafter it would impose its own terms for a final settlement depriving us of our land, our right to Jerusalem as the rightful capital of our future state and the Palestinian refugees' right to return to their homes.

Ultimately, the comprehensive siege on Gaza, which manifestly violated the Fourth Geneva Convention, prohibited the most basic medical supplies to our hospitals. It disallowed the delivery of fuel and supply of electricity to our population. And on top of all of this inhumanity, it denied them food and the freedom of movement, even to seek treatment. This led to the avoidable death of hundreds of patients and the spiralling rise of malnutrition among our children.

Palestinians are appalled that the members of the European Union do not view this obscene siege as a form of aggression. Despite the overwhelming evidence, they shamelessly assert that Hamas brought this catastrophe upon the Palestinian people because it did not renew the truce. Yet we ask, did Israel honour the terms of the ceasefire mediated by Egypt in June? It did not. The agreement stipulated a lifting of the siege and an end to attacks in the West Bank and the Gaza Strip. Despite our full compliance, the Israelis persisted in murdering Palestinians in Gaza as well as the West Bank during what became known as the year of the Annapolis peace.

None of the atrocities committed against our schools, universities, mosques, ministries and civil infra-structure would deter us in the pursuit of our national rights. Undoubtedly, Israel could demolish every building in the Gaza Strip but it would never shatter our determination or steadfastness to live in dignity on our land. Surely, if the gathering of civilians in a building only to then bomb it or the use of phosphorous bombs and missiles are not war crimes, then what is? How many more international treaties and conventions must Zionist Israel breach before it is held accountable? There is not a capital in the world today where free and decent people are not outraged by this brutal oppression. Neither Palestine nor the world would be the same after these crimes.

There is only one way forward and no other. Our condition for a new ceasefire is clear and simple. Israel must end its criminal war and slaughter of our people, lift completely and unconditionally its illegal siege of the Gaza Strip, open all our border crossings and completely withdraw from Gaza. After this we would consider future options. Ultimately, the Palestinians are a people struggling for freedom from occupation and the establishment of an independent state with Jerusalem as its capital and the return of refugees to their villages from which they were expelled. Whatever the cost, the continuation of Israel's massacres will neither break our will nor our aspiration for freedom and independence. "
Posted by Tony at 3:42 AM