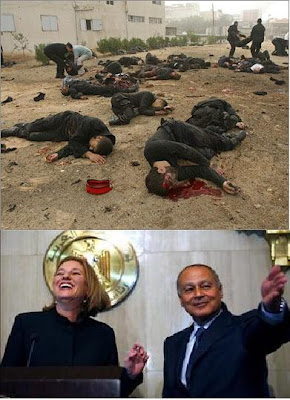 One of the journalists called Livni a "terrorist" and complained that Israel was preventing reporters from covering the war in Gaza. The event's host asked the man to settle for one question, but the latter cried out, "You let her speak here and don't let us ask questions. Since when are terrorists accommodated here?"

"What, are you like Zimbabwe?" another woman told the foreign minister.

The journalists took advantage of the opportunity and the stage to read out sections from human rights organizations' reports on Israel's conduct during Operation Cast Lead. Another journalist accused Israel of murdering innocent civilians......

While she was speaking inside, a protest was being held outside the building by an anti-war group calling themselves "Code Pink", who repeatedly chanted "there is a war criminal in this building.""
Posted by Tony at 3:07 AM