You Need to See This Video 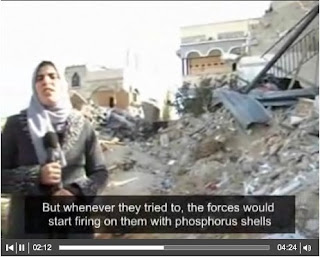 "Gaza: lives in ruins
On January 14, Gazans from Khoza'a near Khan Younis were fired upon and forced to flee their homes. Thirteen were killed and 50 injured, and the whole areas was then destroyed by Israeli forces. Picking through the rubble of their ruined homes, former residents allege a series of human rights abuses in these personal testimonies"

"Fresh evidence of the firing of white phosphorus weapons by Israeli forces in Gaza has emerged from witnesses heard by the Guardian and first hand accounts by human rights groups of their use against civilians. Graphic descriptions of attacks by Israeli forces near the Gaza town of Khan Younis are contained in footage shot by Fida Qishta for the International Solidarity Movement and obtained by the Guardian.

A woman described how on Tuesday Israeli forces "started to fire phosphorus bombs against the people, of course, they are civilians ..." A man added: "A fire broke out and we have to leave out. Fires broke out on the top of the houses. We all jumped out with our women and daughters put off the fire. They were doing that, to help the special forces to occupy the houses. after we put off the fires, they started to shoot towards us. Then they started to raze the houses".

Contact with the shell remnants cause severe burns, sometimes burning the skin to the bone, consistent with descriptions by Ahmed Almi, the Egyptian doctor at the Al-Nasser Hospital in Khan Younis after attacks last Tuesday. Almi said after an hour the entire body of one victim was burned.......

According to the report from the International Solidarity Movement, many patients at the Khan Younis hospital were suffering from serious breathing difficulties after inhaling smoke.

The use of white phosphorous as a weapon – as opposed to its use as an obscurant and infrared blocking smoke screen – is banned by the Third Convention on Conventional Weapons which covers the use of incendiary devices. Though Israel is not a signatory to the convention.....

Israel's use of heavy artillery in residential areas of Gaza City violates the prohibition under the laws of war against indiscriminate attacks and should be stopped immediately, Human Rights Watch said yesterday. "Firing 155mm shells into the center of Gaza City, whatever the target, will likely cause horrific civilian casualties," Garlasco said."
Posted by Tony at 3:22 AM