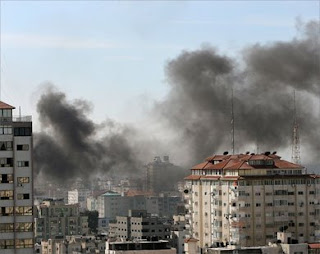 "Israeli forces are continuing to pound Gaza City hitting civilian targets, including a UN building, a hospital, and a building housing several media organizations, in some of the heaviest shelling in nearly three weeks. Israeli troops backed by helicopter gunships, tanks and heavy guns have pushed deep into densely-populated neighborhoods. We go to Gaza City to speak with retired physician Dr. Moussa El-Haddad and we speak with Christopher Gunness, the spokesman for the UN Relief and Works Agency....."
Posted by Tony at 9:09 AM