Time for Israel to be put on trial 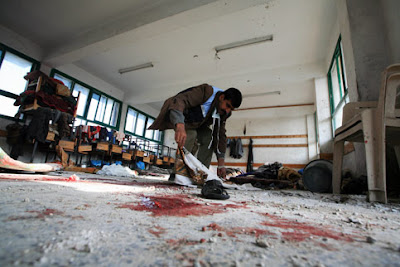 A Palestinian UN worker inspects debris after an Israeli air strike on a UN school in Gaza where civilians were seeking refuge, 17 January 2009.

Elna Sondergaard, The Electronic Intifada, 17 January 2009
(Elna Sondergaard is the Director of the Human Rights Program and Associate Professor of Law at the American University in Cairo. From 2000-2004, she worked as a legal officer for UNRWA at their headquarters in Gaza)

"The brutal and indiscriminate Israeli attacks on the Palestinian population in Gaza during the last weeks have entailed numerous violations of basic norms of international law, such as the principles of proportionality and distinction (between civilians and combatants; and between civilian and military targets). Military acts such as intentionally targeting schools and other civilian facilities are considered violations of international humanitarian law in relation to which the state of Israel bears responsibility -- but they also constitute serious crimes under international law (e.g., war crimes and eventually crimes against humanity) in relation to which individuals should stand trial......

Putting perpetrators on trial would cost the international community nothing, but a lack of such individual responsibility and accountability would cost the civilians in Gaza dear leaving them without remedies and hope -- while politicians and soldiers would again be encouraged to think that they are exempted from the law and that they can get away with anything.

Thus, we cannot allow these crimes to remain untried."
Posted by Tony at 8:16 AM