No resting in peace for Gaza dead 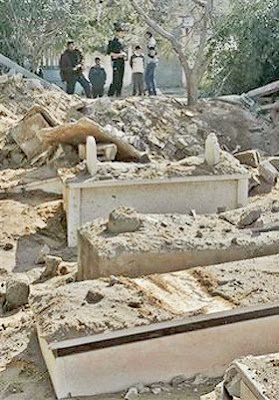 "GAZA (Reuters) - Stench, debris and human remains greeted Palestinians in the city of Gaza on Wednesday after an Israeli missile strike at dawn -- but in this case no one died.

A big explosion tore through the increasingly packed Sheikh Redwan cemetery, shattering tombstones and ripping bones and recently buried flesh from the earth.

"The planes have struck even the dead. There is nothing the planes have not hit in the Gaza Strip," lamented Abu Fayez al-Shurafa, leaning on a cane.

He moved around the graveyard with others who live nearby, gathering remains, righting fallen grave markers, wincing at the smell. "I was shocked they would dare do this. The flesh of the dead flew in them streets and we are collecting them in bags."....."
Posted by Tony at 4:27 AM