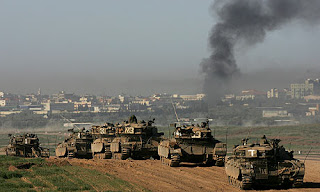 "The headquarters of the UN refugee agency and a hospital in Gaza were on fire today after being struck by Israeli artillery, injuring several people, a UN spokesman and witnesses said.

The compound of the UN Relief and Works Agency was hit by what appeared to be three white phosphorous shells, with three people known to have been hurt, a spokesman for the organisation, Chris Gunness, said. It was on fire, with large amounts of aid supplies, including fuel trucks, at risk, he added.

The compound has been serving as a shelter for hundreds of people fleeing the 20-day Israeli offensive. It was not clear if any people remained inside.

Another UN spokesman in Gaza told the AFP news agency that the organisation was suspending its relief operations following the attack.....

Separately, AFP quoted witnesses as saying that a wing of the Al-Quds hospital in south-west Gaza, where hundreds more people had taken shelter early today from advancing Israeli tanks, was on fire after being struck. It was not clear if there were any injuries.

Even as the first signs of progress towards a ceasefire emerged from Egyptian-led negotiations, Israel increased the intensity of its offensive, striking dozens of sites across Gaza overnight and today.

Reuters reported that a missile or shell had struck the Gaza tower block where the news agency and other media organisations have offices. The 13th floor of the Al-Shurouq Tower, which houses Abu Dhabi television, appeared to have been hit, injuring one of its journalists......"
Posted by Tony at 3:22 AM