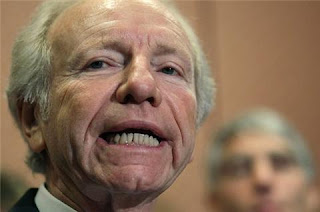 If a bill pushed by Lieberman passes, it could give the US "political authorisation for military force" against Iran.

"Washington, DC - For all it has done to promote confrontation between the United States and Iran, the American Israel Public Affairs Committee has worked to avoid the public perception that AIPAC is openly promoting war. In AIPAC's public documents, the emphasis has always been on tougher sanctions. (If you make sanctions "tough" enough - an effective embargo - that is an act of war, but it is still at one remove from saying that the US should start bombing.)

But a new Senate effort to move the goalposts of US policy to declare it "unacceptable" for Iran to develop a nuclear weapons capability - not a nuclear weapon, but the technical capacity to create one - gives AIPAC the opportunity to make a choice which all can observe. If the Lieberman resolution becomes an ask for AIPAC lobbyists at the March AIPAC policy conference, then the world will know: AIPAC is lobbying Congress for war with Iran.

The first "resolved" paragraph of the Lieberman resolution affirms that it is a "vital national interest" of the United States to prevent Iran from acquiring a "nuclear weapons capability"......."
Posted by Tony at 7:02 AM