Jordan Is Not Palestine, Neither Is Qatar 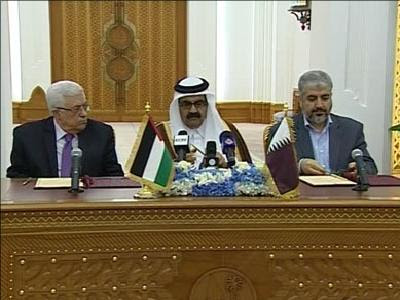 ".....Following multiple victories in recent elections across the Arab world, Islamist movements are boasting that there political time has arrived. The “Arab Spring,” as it has been coined, may be morphing into an “Islamic Winter,” as recently noted by Galilaean Palestinian attorney Sabri Jiryis. It is very possible that Hamas’ decision to act now on so many fronts can be attributed to the broader Islamic political waves that are moving across the region.....

What does all this movement mean? Well, it depends on whom you ask. Islamists will say that Hamas is getting renewed energy by indications that the Arab Spring is really turning into an “Islamic Winter.” Palestinians in leadership today will say Hamas feels the heat in Syria and on Iran, and although it may have found another location to base its operations, it ultimately knows that without entering into an operational political system, it cannot maintain control on an Israeli-siege Gaza forever.

Something much more dangerous is in process. Both Hamas and Palestinian President Abbas’ Fateh movements are in dire need to unite to save themselves, after totally decimating anything resembling a national liberation movement or an operating political system. The average Palestinian in Jerusalem, Haifa, Shatila, and Santiago is without voice, without representation, and further away from freedom, return and independence than they have ever been. Hamas’ Khaled Meshaal looks more like someone preparing to enter and take over the secular PLO than someone begging to take over a Palestinian Authority that has been emptied of any serious authority (if it ever had any).

Israel may be laughing away at all this, proud that they destroyed all remnants of a peace process, but history has lessons for he who laughs last."
Posted by Tony at 6:51 AM