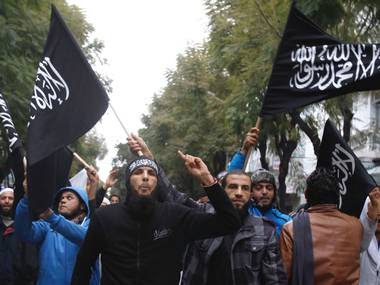 "....The town of Sejnane, north-west of Tunis, witnessed, briefly, the existence of an "Islamic emirate" at the end of last year when around 200 Salafists took control, turned government buildings into prisons for "sinning" – in most cases for drinking alcohol – and beat inmates. A shop selling CDs of western songs in Arabic was set on fire and a self-proclaimed Islamist "judge" announced to the owner that "if you try once more to distract Muslims from the mosque, it will be your home and all those in it who will burn".

Women began to wear the niqab, men to grow beards and wear Afghan-style clothes. The government did nothing. Was the Ennahda Party supporting the Salafists?

Attacks on cinemas began shortly afterwards, the owner of Nessma TV, Nabil Karoui, put on trial for showing Persepolis – about the reactions of a young girl growing up in the 1979 Iranian revolution – a film deemed "contrary to the values of the people". Two intellectuals were savagely beaten and 10,000 demonstrators marched through Tunis and other cities to protest at the increase of extremism.

In the much-underrated French magazine Jeune Afrique, Amel Grami, head of the Islamic Studies department at Manouba University, described how a dispute over a female student who insisted on wearing full head-covering to college resulted in an invasion of the campus by sword-carrying Salafists, some of whom shouted "dirty whore" when staff objected to the separation of male and female students. According to Amel Grami, the Salafists were supported by two sons of the Tunisian Interior Minister, Ali Laarayedh.

Little wonder, then, that the impending arrival in Tunisia of the Egyptian preacher Wajdi Ghanim created such anger among secular Tunisians. Ghanim supports the Tunisian Salafists, advocates a return to an older, more "genuine" Islam and – in the view of human rights groups – wants to "create hatred between Tunisians". It all has the feel of Algeria before the army's cancellation of the second round of elections which would have brought the Islamic Salvation Front to power in 1992. We shall not dwell on the carnage and bloodletting that followed......"
Posted by Tony at 4:33 AM