Moscow stirs itself on Syria

"With the "Friends of Syria" (FOS) grouping sponsored by the Western powers and their Arab allies scheduled to hold its first meeting in Tunis on Friday, Russian diplomacy has shifted gear into a proactive mode. The Kremlin was a beehive of diplomatic activity on Wednesday.

The venue of the birthplace of the "Arab Spring" for the FOS to gather might, prima facie, give an impression that the name of the game is high-flown rhetoric and nothing more.

But that is not how Moscow views the developing paradigm. It estimates that Tunis with its Mediterranean climate and languid look has been carefully chosen as a deceptive location for the West to launch a concerted assault on the citadel of President Bashar al-Assad and to legitimize it in the world opinion. Moscow senses that the final assault on Syria by the United States may not far off, although the US propaganda makes it out to be that the Barack Obama administration is on the horns of a dilemma, torn apart by an existential angst.....

A Russian commentary on Wednesday analyzed that the co-relation of forces in the heart of the Middle Eastern region is changing dramatically: 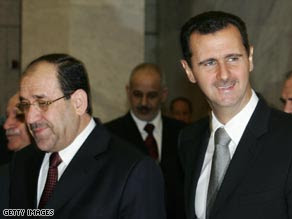 Syria is developing a special relationship with Iraq, which sympathizes with Syria's efforts to stabilize the domestic situation. It is quite probable that with the withdrawal of US troops from Iraq, Iran, Iraq and Syria will at some point naturally form a loose, tripartite alliance in the Middle East. Given that the majority of the Iraqis are Shiite and Iran's growing influence in Iraq in the last few years, such a scenario is by no means improbable.

The Kremlin diplomatic initiatives on Wednesday seems to have factored in the emergent regional scenario."
Posted by Tony at 7:39 AM