Greece sells its independence to escape the burden of debt 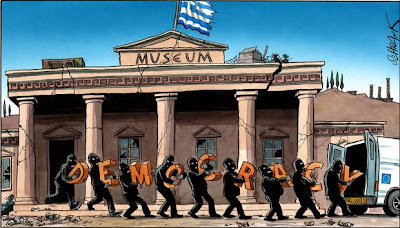 Special Dispatch: In the birthplace of democracy, self-determination has lost out to economic dictats from abroad. And, as ever, it's the poor who suffer the most

"Greeks expect to agree a deal with the Eurozone leaders tomorrow that will cede much of their country's independence. Greece will become an economic – and to a large extent a political – colony of Germany and its allies. Berlin will have a say in everything from the choice of prime minister to the types of medicines dispensed by pharmacies.

In return for €230bn, made up of €130bn in fresh loans and €100bn in write-downs on privately held Greek government bonds, Greece is relieved from its immediate debt burden. But the money does not go to the Greek government, still less to the Greek people. It simply leaves them to live off the money they earn.

For all the television pictures of rioting protesters, clouds of tear gas and burning buildings in central Athens over the last week, a striking feature of the political landscape is the lack of resistance to the German terms. The Greek political elite sound and look stunned, grudgingly surrendering to the demands of the Troika (EU, IMF and European Central Bank), but bereft of ideas about what else to do......"
Posted by Tony at 4:59 AM