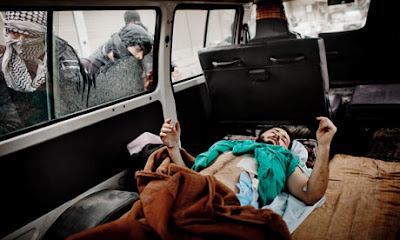 "In Bashar al-Assad's Syria, it is not just forbidden to speak, demonstrate and protest: it is also forbidden both to give medical treatment, and to receive treatment yourself. Since the beginning of the uprising, the regime has been waging a merciless war against any individual or institution capable of bringing medical aid to the victims of repression. "It's very dangerous to be a doctor or a pharmacist," a pharmacist from the Baba Amro neighbourhood of Homs tells me. Medical personnel are imprisoned – like the nurse in the nearby district of al-Qusayr, arrested the day after he showed me around his hidden emergency-care centre, its carpets covered with plastic tarpaulins to protect them from blood – or killed, like Abdur Rahim Amir, the only doctor in that centre, murdered in cold blood in November by military security, while he sought to treat civilians wounded during the army's assault on Rastan to the north. Or tortured.....

The trip from Qusayr on the border to Homs, about 30 kilometres, will be made in the same way: by going from one house to another, from one vehicle to another, from one hand to another. A wide network of civilians helps the Free Syrian Army and the revolution. At every stage, a vehicle or motorbike goes in front to check if the road is free. And when we move, there are always people in front, around, behind us; cellphones are continually ringing to transmit the latest news.

Everything happens as if, faced with the police and security grid of the Ba'ath party and the mukhabarats – a grid that has dominated the life of the country for decades – society had in these past few months put in place a counter-grid, almost as effective, made of civilian activists, notables, religious figures, and, more and more, armed forces – the deserters who form the FSA. This counter-grid resists the other one, circumvents it, and is even starting to absorb it in part. When you travel between the Lebanese border and Homs, it becomes visible. There has, of course, always been a passive resistance to the regime's grid, but now this second grid has completely broken away from its ties to the former. As if Syrian society, since the spring, had split in two, and as if both parallel societies were coexisting in the country, in mortal conflict."
Posted by Tony at 4:00 AM