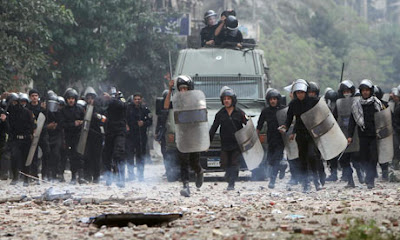 "A year after the uprising, Egypt's security forces continue to kill protesters with the same brutal tactics used in Hosni Mubarak’s last days in power, Amnesty International said after concluding that riot police yet again used excessive force in policing protests in Cairo and Suez.

The protests earlier this month followed the Port Said tragedy in which more than 70 football fans from Al-Ahly club were killed after a football match on 1 February.

The organization found that, between 2 and 6 February, the Ministry of Interior’s Central Security Forces (riot police) used excessive force, including firearms, to disperse angry protests, killing at least 16 people and injuring hundreds of others.
"The behaviour of the security forces in dealing with these protests is unfortunately very reminiscent of a time many Egyptians thought they had left behind after the ‘25 January Revolution’," said Hassiba Hadj Sahraoui, Deputy Director of the Middle East and North Africa Programme at Amnesty International.

“Promises of reform of the security forces continue to ring hollow in the face of the killing of more than a hundred protesters in the last five months.”

“Not only have the authorities not reformed the security forces but evidence of the use of rubber bullets and live ammunition is met with denial and accusation of foreign interference by Egyptian officials.”......."
Posted by Tony at 4:28 AM