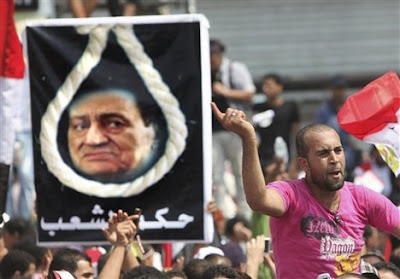 At first Egyptians simply wanted Mubarak out. But the more they learn, the more calls for execution grow

"...In the year since his removal the mood of the country has grown more harsh. The symbolic nooses the western media are so fond of showing only started to be hung in Tahrir Square and outside the courtroom months into the revolution. The appetite of the protesters was never for summary justice; they wanted a fair and comprehensive trial and were prepared for it to take time. But how much time? As the trial dragged on we learned more and more about the systematic ruin that the man had been overseeing: our ruin, brought to life before us – the industries dismantled, the ministries bankrupted, the water poisoned, the gold and ancient artefacts spirited away, the foreign debt accumulated and embezzled, the lives wasted.

And while we were absorbing this information we knew that Mubarak continued to live in luxury....

And we see it against the fact that the armed forces, headed by the Supreme Council of the Armed Forces (Scaf) – Mubarak's boys whom he left in charge of us – have engineered confrontations with the people in which around 200 civilians have been killed and 12,000 court-martialled. No wonder the mood has turned, and in place of the simple "Leave!" we now hear demands for execution.

And yet, in a sense, the trial has become a sideshow, a distraction. It allows Scaf and the current powers to promote the perception that the big crimes that continue to be committed are not theirs, but are organised by, if not Mubarak, then his sons through their still active network.....

The mood of the country is that Mubarak deserves and should get the maximum sentence possible. In Egypt that would be execution. But the Scaf, with their devotion to hierarchy, to form, to respect (for armed forces bosses, that is), will find it hard to see the man who for 30 years was their commander-in-chief get the sentence he deserves. Judge Ahmad Rif'at has set the date for his sentencing in early June. Mubarak is 84. Will he survive? And most importantly: what happens to Egypt's money and Egypt's falsely incurred debt?"
Posted by Tony at 3:16 PM