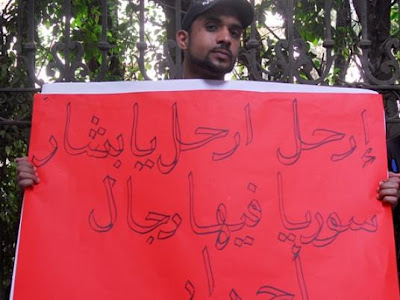 "The Foreign Ministry decided to withdraw the Egyptian ambassador to Syria on Sunday, as thousands of protesters staged a sit-in outside the Syrian Embassy in Cairo.

Thousands of protesters outside the embassy in Cairo on Friday demanded the dismissal of the Syrian ambassador in Egypt.

Mass protests in Syria began in March last year to demand that President Bashar al-Assad, who inherited the post from his father, step down.

More than 6,000 civilians have been killed since the outbreak of the demonstrations, according to activists and the United Nations."
Posted by Tony at 3:53 AM