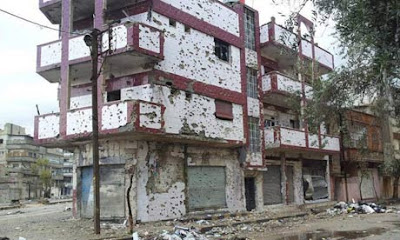 "The bombardment of the city of Homs by the Syrian military continued unabated on Wednesday with at least 80 deaths in besieged enclaves, where residents say they are preparing for an imminent final onslaught.

Tank columns were on Tuesday seen streaming from Damascus towards Syria's third city and are reported to have reinforced positions that have already been barraging the suburbs of Bab al-Amr and al-Khalideyah for almost three weeks.

The relentless assault has taken on a new dimension in the past seven days, with increasingly heavy artillery fired as attempts have been made to negotiate a daily ceasefire and open a humanitarian corridor to allow aid into the neighbourhoods cut off from the rest of the city.

Up to 60 of those reported killed in Homs on Wednesday were killed in an afternoon artillery barrage. Activists said some military defectors who have joined a rebel army were among the dead.

"This was in one part of the city only," said one activist. "The shelling was with very heavy weapons. It was not mortars or rockets."

Up to 20,000 residents of the besieged areas remain unable to leave amid desperate shortages of food and water. Global campaigning group Avaaz claimed seven of its activists were executed on Wednesday while trying to bring medical supplies into the city to treat residents wounded by the shelling....."
Posted by Tony at 12:03 PM